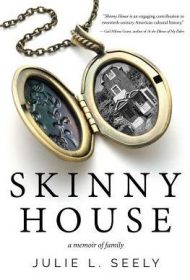 Not only has Julie L. Seely written an elegant, heartfelt family memoir, but she also offers a vivid slice of 20th-century African-American history in her book, Skinny House: A Memoir of Family.

Seely’s grandfather, Nathan, a skilled carpenter, established Seely Bros. Construction Co. with his brother in 1923 to build homes for African-Americans. One of the first black contractors in Westchester County, New York, he also built a roomy house for him and his wife, securing their place in a burgeoning black middle class. When the Depression struck, Nathan lost his business and property, save for a tiny parcel nestled between two houses. Here he built a 10-foot-wide, three-story house from salvaged materials for the couple and their two children. Nathan’s design maximized use of the tall, narrow space, although it lacked indoor plumbing.

The skinny house, which embodied Nathan’s failures but also his resilience and ingenuity, shaped the Seely family and its legacy. Sheltered but beleaguered, Nathan’s family splintered. The house was symbolic to Nathan’s wife of the family’s fall in stature. She resented the house’s inconveniences (collecting outdoor well water and using a neighbor’s outhouse) and blamed her husband.

Embarrassed by his family’s circumstances, Nathan’s son hated the house. Without a bathroom, the painfully shy 12-year-old waited until late at night to take sponge baths in the kitchen, desperate for privacy. For him, the house was the cause and setting for not only his parents’ marital woes and eventual split, but his own humiliation.

Seely gives voice to each family member’s pain, lending authenticity and familiarity with which readers can empathize. Her seamless narrative is laced with astute connections. For example, she notes that Nathan was ambidextrous, later using that as a metaphor: “The lesson of Nathan’s life is that life is full of contradictions. It is ambidextrous in nature and a balance of successes and failures . . .”  She includes notated photos and 34 pages of bibliography and endnotes.

As Seely traces her family’s ups and downs through the Roaring Twenties, Depression and Civil Rights eras, her extensive research and insightful rendering make the tale eminently relatable. Her deft writing and diligent research give this flawless work a weightiness and impact that won’t soon leave readers.