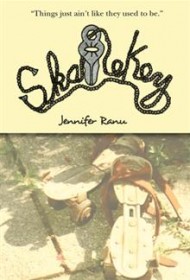 The inspiration for Skatekey came to Jennifer Ranu on a beach, where four middle-age women were sunning themselves and discussing their childhoods.  A common factor among them was rollerskating and the skate key that let you attach the old-fashioned metal skates to your shoes.

Innovation has made the skate key a relic of the past. But it was a necessity for skaters back in the day – usually worn on a shoelace or ribbon around the neck or wrist – and it still held a special place for these women.  It “opened a door that securely guarded precious innocent childhood memories and released from within them joy and happiness that was all their own,” according to the introduction.

Here, Ranu has compiled 22 memoirs from men and women who have recollections of rollerskating and skate keys.

Each of the book’s five chapters deals with a particular time in America, including the Great Depression, WWII, and the Boomer generation.  The memoirs are brief, mostly five or six pages, and go beyond skates and skate keys, describing each person’s history and family life and how their lives meshed with the times.

Lena, for example, the daughter of Italian immigrants, describes her father’s Depression-era tailor shop and how she’d deliver clothing to her father’s customers – on skates, of course.  Bindu, who came to the U.S. in 1977 as a six-year-old, tells how she bonded with a Greek girl and two Korean sisters over their love of skating and how it helped them assimilate into American culture.

In some stories, the skating component is mentioned only in passing, weakening the thrust of the theme.  Additionally, closer copyediting is needed:  “famous” appears as “fameous,”  “Philippines” as “Philippians,” “wrought-iron” as “raw iron,” “chutzpa” as “hootspa,” etc. These issues detract from the book’s focus and authority.

But for those simply interested in American life over five decades and willing to overlook the editing missteps, Skatekey provides an engaging narrative.