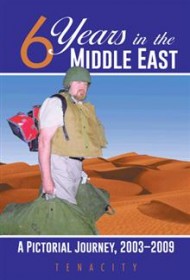 After the U.S. invaded Iraq in 2003, Tenacity (presumably using a pseudonym because of the sensitive nature of his work) was one of the first Department of Defense (DoD) contractors sent into the country to rebuild the communications network for Iraq’s provisional government. This memoir recounts his time working on this job, and others, in the Middle East.

Placed in charge of integrating Western servers and routers with aging, mostly Chinese, hardware, Tenacity was not only a combat-tested Vietnam veteran and skillful technician with a security clearance, he also was laid back and politically savvy—well-suited to navigate the dangerous, chaotic environment.

The book’s first half describes his two years in Iraq, where nearby IED explosions were common and rides in the sturdy C130 airplane harrowing. Tenacity is critical of U.S. staff and officers who used their presence to pad resumes, and of “Blackwater mercenaries.” The jovial 59-year-old used humor to endear himself to the motley international, post-invasion cast — a tack equally effective on readers.

Near the book’s end, Tenacity returns to Iraq for two years, training occupying forces on how to identify terrorists with retinal scans. In between, he fulfills contractor stints elsewhere in the region (including Afghanistan and Oman) and enjoys a lovely romance with a Brazilian beauty he meets on eHarmony.

The author’s blunt descriptions and opinions are priceless, and should prove useful for students of America’s role in the Middle East. But the author tells the story chronologically, without the crafted narrative structure that builds interest and tension. Colleagues are mentioned here and there by first names only, with no character development; technical issues are not explained, and government acronyms are abundant. As such, the memoir reads like a lightly revised personal journal rather than polished creative nonfiction.

Given the journal feel, the book’s most likely audience is Tenacity’s family and friends. While the narrative offers some compelling moments for general readers, there simply aren’t enough to sustain engagement throughout.
Also available in hardcover and ebook.