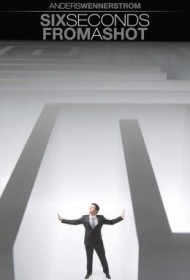 This slim book is divided into two parts: one is a play, the other an extended poem.

The play’s cast includes two men, Peter and Jonathan, as well as a third man whose phone call is much anticipated. No context is provided for the extended conversation that takes place between Peter and Jonathan, which is characterized by vague references and persistent non sequiturs, as epitomized here:

“PETER: I don’t want to celebrate pain for your sheer pleasure. And, by the way, who will tell the world about your greatness? I won’t do that.

“JONATHAN: The desire between us when you hit me will create a miracle. It’s an image I like to feel.

“PETER: Who will give you respect for this? I will not.

“JONATHAN: We will tell the world in another kind of way.”

The poem, titled “The Solitude Song,” begins with an italicized designation: “At the computer, Peter, 41 years old, leading the happening.” In the play’s dramatis personae, Peter is introduced as 24 years old, leaving readers to wonder if this poetic speaker is the same character, 17 years later.

The poem is a rambling soliloquy that begins in Peter’s voice: “My last words of importance today were/ ‘I love you’.” We follow the speaker as he jumps from one self-disclosure to another: “I’m also a wanker/ at other moments”; “my more or less transgendered/ bisexual persona/ that dreams about women/ but speaks to other men as a woman” and so on. Inexplicably, the poem ends in third person: “now Peter has said/ his last words for a long while.”

Together, this play and poem leave readers feeling confused, frustrated, and disoriented— and ultimately excluded from the speakers’ lives. While interesting ideas seem to be floating around in the text, a revision offering more context and thematic unity is necessary in order for both works to connect with readers on a meaningful level.