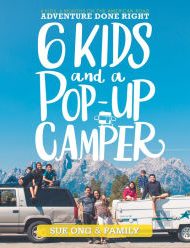 Many people don’t see 43 states in a lifetime. The Ong family, from Singapore, covered that many during a six-month, 13,135-mile trip around the U.S. Here, mother Sue, with contributions from other family members, documents the journey she took in 2015 with husband Dan and their six home-schooled kids, ages 3 to 15.

The Ongs traveled in a 16-year-old Chevy Suburban, towing a used pop-up camper. Their odyssey included three segments: a Southern swing where they mostly reconnected with friends; a Western leg emphasizing adventure; and an Eastern loop focusing on history. Between loops, the Ongs returned to their base of operations, the Wisconsin farm of friends.

Atypical of most tourist families, the Ong’s were undeterred by uncomfortable conditions, unfamiliar food, frequent car trouble and tight finances. Also (according to Sue, at least), the kids got along wonderfully. The family’s spirit no doubt can be traced to their faith. Conservative Baptists, they used a longstanding network of ministers and friends across the U.S., to line up churches to visit and conferences to attend. Their friends housed them when they came to town, and churches let them set up the camper in their parking lots.

The book is not a perfect travelogue. There seem to be occasional narrative gaps; for example, incidents are sometimes mentioned in captions but not in the text. Son Asher took the photos, and while his work is very good, the images are often too small, many the size of postage stamps. Additionally, the oversized pages are dense with text and photos, and appear crowded and daunting.

Still, anyone contemplating a cross-country drive with kids could benefit from the information provided here. If you’re adventurous and your children are half as sharp and curious as the Ongs’, it will surely be a trip worth taking.