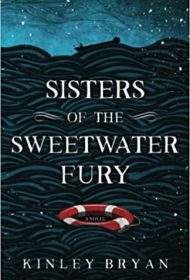 Three sisters find their lives at risk during a dramatic storm on the Great Lakes in 1913 in this utterly immersive historical novel.

Sunny Colvin has spent ten years working as a galley cook on freight ships with her husband, ship’s steward Herb. Now she has an opportunity to make her dream of running her own restaurant a reality and wants to talk Herb into it. But before she can do so, they must survive a days-long storm across Lake Huron.

Sunny’s younger sister Cordelia is also on the water, on Lake Superior. Newly, and possibly rashly married to a ship’s captain, she’s travelling with him in the hopes of knowing him better.

Meanwhile, on land, their widowed third sister, Agnes, chaffs at her life at home with their demanding mother and finds herself drawn toward the lifeboat keeper’s sister, Lizzie. Each sister dreams of changing her life. Will the storm make or break them?

This tale of one week in November 1913 is recounted in vivid, absorbing detail. Chapters alternate between the three sisters, all strong characters. Sunny is brave and resilient, Cordelia hopeful and kind, Agnes more resilient than she knows but unsure of what she wants. As events unfold and the storm wreaks havoc on land and sea, each sister’s story is moving to read.

Kinley Bryan successfully weaves description, dialogue and dramatic action, conveying a detailed picture of life onboard a ship without slowing the story’s pace. Secondary characters are well rendered; each strand of the narrative is emotionally charged; and the storm itself is masterfully described as ships and shore are battered by hurricane force winds and blizzards. “In watching that expanse of dark water stippled with whitecaps,” the author writes, “it wasn’t hard to imagine a fantastical sea creature like Mishipeshu rising up and thrashing ships with its gigantic tail.”

Inspired by actual events and the author’s own family history, Bryan’s debut is a highly assured and gripping novel.