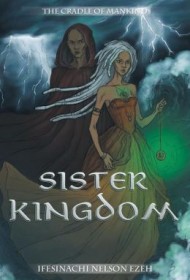 This African-based fantasy concerns a benevolent sorceress and her younger brother’s attempt to keep an evil spirit from manifesting itself into the world.

When the “great witch” Agadi Nwanyi is given two crown amulets from Ikenga, the supreme god, she understands what “needs to be done” in order to keep Iluowa from bringing his darkness to the temporal world. Realizing that the powerful amulets could corrupt her and her brother, the duo decides to find two of the kindest and most courageous men in all of Umuokwute and give the magical items to them.

Thus begins a multi-generational journey in which the storyline chronicles the lives of those who wear the amulets and their journeys throughout the Sister Lands. Many characters are featured in this section—which makes up the bulk of the novel—but because the narrative lacks any kind of deep characterization, these vignettes come across as flat and unengaging.

Additionally, the entire novel has a “lost in translation” feel to it. In so many instances, words are used improperly or, at the very least, oddly. For example: “He bound his sandals on to his comely feet…”; “Chika was immediately transformed into awesomeness…”;  and “…her adolescence adore showing off in a magisterial fashion.”

Another confusing aspect of the novel is the similarity of so many names; readers will undoubtedly have trouble differentiating between certain characters.

That said: the pseudo-African backdrop is vividly described (both culturally and geographically), and the tone has a decidedly appealing folkloric quality about it.

But while the novel’s premise shows potential, the execution throughout is flawed. The confluence of issues—cardboard characters, numerous questions involving key plot points, and an awkward narrative that seems rushed and unpolished—ultimately makes this a forgettable read.