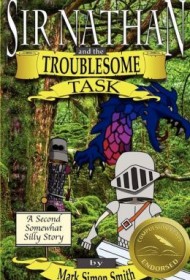 In the first of this series, Sir Nathan and the Quest for Queen Gobbledeegook, Sir Nathan established himself as the hero of the magical land of Mariskatania by finding and rescuing the queen from frightening giants. In this second installment, the twin giants, who were reduced to human size and adopted by the queen, have been kidnapped. Sir Nathan has been called in to retrieve the twins and once again save the day.

With their constant mean-spirited practical jokes, the twins have been a thorn in Sir Nathan’s side. But true to his hero status, Sir Nathan journeys on his valiant, philosophical-talking steed to save the unruly twins and smite anyone and anything in his path. Despite his objections, he is accompanied by Amazing Grace, the daughter of the head members of the palace Cleaning and Preening Crew. Grace’s fondest desire is to become a knight, but her parents have never allowed her to take the two-hour training course required, and, although there’s no doubt about the girl’s courage and pluck, the fact that she thinks a mop she has named “Flopsy” is a real horse will make readers question her sanity.

To call this book “somewhat silly,” is putting it mildly. Upside-down lakes, mice who live in dragons’ mouths, licorice sheep, tea-drinking ogres and trees capable of producing any kind of food are but a few of the author’s creative inventions. It’s easy to see how such a tale might appeal to eight-to-ten year olds, who can’t get enough of nonsensical things. One drawback is the extremely long chapters, which average over 50 pages. Young attention spans might be better served with smaller doses.

Derek K. Gebler’s five line drawings that illustrate the book are delightful; a few more would have been welcome.