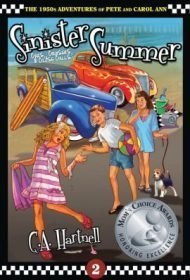 In C.A. Hartnell’s second title in her middle-grade series, an 11-year-old girl and her best friend experience a memorable summer together, full of fun—but also fear.

Set in the ‘50s, the story opens with Carol Ann riding a go-cart while her 11-year-old neighbor Pete cheers her on. Just after she crashes into a tree and emerges unscathed, “The Cruisers,” a group of three teenage boys, drives by and stops to buy tires from Pete’s older brother Hawk. Pete tells Carol Ann that the boys “fight, race, and cause trouble all over town.” As the story unfolds, The Cruisers show up intermittently, starting an argument at a party, dangerously speeding and causing “several close calls.”

Each chapter chronicles one of Pete and Carol Ann’s adventures—many with a dangerous turn; for example, Carol Ann nearly drowns at the beach, and she and her family get in a car crash. After each close call, Carol Ann refers to a relevant Bible quote, and she and Pete often thank God for having saved her. In the end, readers learn an unexpected revelation about The Cruisers.

Unfortunately, much of the dialogue is stiff and unrealistic; in the middle of conversations, characters often address each other by name. And while the book is peppered with references to songs and cultural events of the 50’s that could be interesting, the characters reveal these references with textbook-like descriptions: “This is as much fun as going to the new amusement park that Walt Disney is opening today, July seventeenth, in Anaheim.”

The book includes lively illustrations that perfectly evoke the era. There is also a glossary of 1950s words and a price list of items from the ‘50s. (While young readers may appreciate learning that a girl’s swim suit cost $1.59 back then, they probably won’t care about the cost of paper cups, men’s “shave” lotion and many other items.) Photographs of Carol Ann and her family, a recipe for Peanut Butter Bites, and a list of resources where readers can learn more about the places mentioned round out the offering

This is a promising concept with high production values. But it lacks the narrative drive and authentic dialogue necessary to keep readers turning pages. With revision, it could be popular among a young Christian audience.