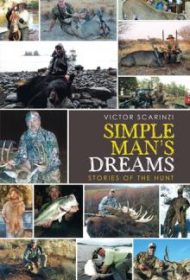 In Simple Man’s Dreams: Stories of the Hunt, “Swampman,” as Victor Scarinzi likes to call himself, offers a reader-friendly memoir about his hunting adventures.

Many chapters begin with Scarinzi greeting readers (“Hello folks”) and many end with him wishing them good luck in their quests. There’s almost a newsletter feel as he describes his adventures. Although useful tips are interspersed throughout – ways to stalk prey, how to scout an area, and so forth – the majority of the narrative recounts hunting trips and the game Scarinzi has taken.

Scarinzi, who has a taxidermy business, hunts extensively in his native Louisiana and has traveled the U.S. as well as to Canada, Mexico, Africa, the Amazon and New Zealand. The list of game he has taken is long: deer, antelope, boar, bear, coyote, wildebeest, impala, kudu, eland, warthog, zebra, steenbok, catfish, turkey, wild goat, caribou, duck, javelina and more.

Scarinzi positions himself as an outdoorsman who lays his hands on each kill and thanks God for the opportunity, but he can also seem like the type of person non-hunters criticize. One time, for example, he killed a mountain lion with a .357 magnum after it had been treed by a pack of dogs. On another, while hunting javelina, he “popped” a coyote and shot a jackrabbit, both from his vehicle. And, he admits, sometimes “it’s about killing and not eating.”

But this is written for those who already enjoy the pastime or who are thinking about taking it up, rather than non-hunters. Although Scarinzi leaves out seemingly relevant details, such as some exact locations, his readers will likely let it pass. They are here for the hunt, and Scarinzi delivers plenty of that.