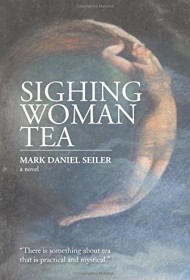 The back cover of Mark Daniel Seiler’s engaging novel, Sighing Woman Tea, counsels readers to “put on the kettle, and cozy up to a nice cup of tea …” It’s good advice. With humor, history and a reverence for tea, Seiler spins a tale that includes international trade agreements, a South Pacific island, the Crusades, cultural differences, military fiascos, love and a long list of characters. Somehow, all the pieces fit.

The iconic and expensive Sighing Woman tea, known “to enhance cognitive abilities” is only cultivated on Viridis, the spiritual name of the fictional Green Island. This tropical haven boasts contrasting elements: islanders who have never left; islanders who left and returned with pedigreed college educations; homes with modern amenities and those without. Yet everyone lives in harmony and, with the exception of various clergy representing a range of denominations, all demonstrate some form of devotion related to tea.

The story begins with Figas, a young, award-winning math genius who returns to his island home to warn of a possible threat to the tea. He’s ignored for no other reason than a general belief that all is well. Of course, it isn’t. There’s no main character. Instead, there are numerous major and minor players whose lives intersect either because they grow the tea, want to protect it, share its history or control it.

At times, the story can be far-fetched, such as the invasion by a military reconnaissance team. Although this plot twist helps develop the threat to the islanders and their tea, it stretches believability — although, fortunately, not to the breaking point. The author also could have culled some of his characters and trimmed the story’s length.

Nonetheless, Seiler conveys the intriguing message that when left alone from outside threats, most communities know the best way to co-exist. He evokes colorful images of an island paradise and deftly imbues each character with distinct personality traits, resulting in a compelling, well-told tale overall.