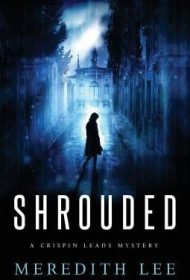 Fascination with the Shroud of Turin has sparked scientific, literary, cinematic and religious intrigue. With so many disciplines focusing on the subject, some might consider its story appeal to be worn thin. But Meredith Lee (pen name for writers Dixie Lee Evatt and Sue Meredith Cleveland) has crafted an exceptionally engaging mystery with the Shroud at its center.

Crispin Leads is a young NYU graduate student newly arrived in Rome, where she has been awarded a Vatican grant to pursue research on a topic unrelated to the Shroud. Within hours of her arrival, she’s befriended by Roberto Rossini, who she later learns is a priest. Shortly thereafter, a murder occurs in the Vatican offices where Crispin is to meet with a Bishop to discuss her research. While waiting, Crispin hears screaming from down the hall where a corpse is soon discovered, making her a witness, of sorts.

Coincidently, Crispin is reunited with a childhood friend, a nun working in the Office for Documentation of Holy Relics – Holy Shroud of Turin. It’s not long before another murder occurs, which leads Crispin and Roberto to discover connections between the deaths and the Shroud.

The plot delivers numerous twists and surprises as the well-paced narrative moves from Rome to Turin, from Spain to Paris. The author richly describes each locale, including specific landmarks and foods unique to the regions.

Even better, the characters are well-developed and engaging. Crispin is a vulnerable, intelligent young woman, while Roberto provides a calming presence. He also has a secret surrounding him that, despite his cleric collar, raises questions about his motives. A handful of other characters further propel the story and ratchet up the intrigue.

Shrouded ends with a prologue to what the author notes is “the next installment” in the “Crispin Leads Mystery Series.” This is good news indeed. Crispin is a likeable character, one that readers will want to get to know further as they watch her methodical—and absorbing—deduction skills in action.