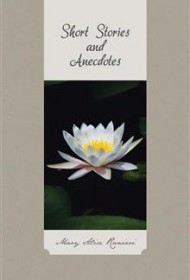 Life experiences, observations, and struggles are at the core of this collection of 16 vignettes based on the early years of the author and family members.

The biographical stories traverse from China to Texas, covering a time period from the Depression years in the 1930s to about 1975. In them, the author muses about subjects such as culture clashes, unexpected deaths, summer camp experiences and natural disasters. The author has changed the names of those involved, although she notes that the situations all have family links.

While Mary Alice Ranieri writes on the back cover that the stories are “designed to show a lesson for the reader to heed,” most fail to do so because the snippets are much too brief, lacking the detail and emotional depth that would draw someone in. She describes potentially dramatic situations (such as the Chinese earthquake in 1975) but rather than developing them, ends her commentaries rather abruptly.

The author offers glimmers of observant writing. For example, in describing a seven-year-old schoolgirl from the impoverished late 1930s, she notes: “This lack of quality extended to her sack-cloth checkered dress, home-spun socks, and tennis shoes as she signed up for free milk and graham crackers with others who carried no lunch pails.” But these moments don’t come as often as readers would hope.

In addition to more depth, the book requires some editing attention. In one story, for example, the main character’s name is spelled two ways (Myra, Mara). Another misuses a word: “Mossy’s milk sublimated [rather than supplemented] the family diet . . .”

This collection may be of interest to family members who recognize themselves in some situations, but overall, its stories are too cursory to draw in readers at large.