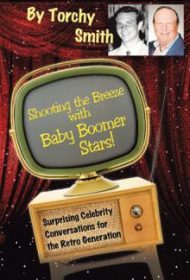 Torchy Smith was a retired Cleveland businessman when he started wondering where the stars of his favorite 1950s, ‘60s and ‘70s TV shows were decades later. Believing there must be others who felt similarly, he launched a Facebook and YouTube page and began cold-contacting celebrities of yesteryear.

Smith was so successful that he now has an iHeartRadio program dedicated to his interviews with retro celebrities, and a Baby Boomers Talk Radio podcast. His book, Shooting the Breeze with Baby Boomer Stars!, details 50 of those interviews.

The book is divided into various categories: Mousketeers, TV moms, Leave it to Beaver and The Virginians cast members, and more. While the stars aren’t all household names, many are icons, including newsman Geraldo Rivera, Mouseketeer Cubby O’Brien, “Beaver” Jerry Mathers, Happy Days’ Marion Ross, and Laverne & Shirley’s Cindy Williams.

None of the revelations in Smith’s book are TMZ-worthy, but readers will find interesting tidbits. For instance, Smith recounts how some male Mouseketeers stars were bullied at school for their dorky TV antics. Jon Provost (Timmy from Lassie) reveals that Timmy never fell down a well, even though “Timmy’s in the well!” became a catchphrase. “He fell over cliffs, into rivers, even onto quicksand, and into an abandoned mine shaft, but never a well,” Provost told Smith.

Larry Wilcox (Officer Jon Baker on CHiPs) talks about the emotional pain of being a Vietnam war veteran. And several of the ‘50s and ‘60s child actors detail the poor pay and lack of residuals from their TV shows.

Smith’s conversational writing style is accessible and breezy. Clearly a fan of those he interviews, the author aims for an upbeat tone throughout, even though serious topics sometimes arise. While the interviews generally skim the surface, that’s part of its appeal: Boomers steeped in this era of TV will find that reading these stories is much like eating potato chips: It’s hard to resist one more—and then one more after that.