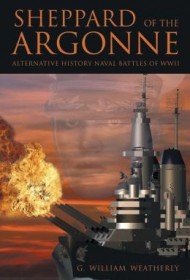 This alternative naval military history story is, in a word, authentic. G. William Weatherly is a former U.S. Navy captain who obviously knows about warships and command, and it shows throughout this gripping novel replete with the sights, sounds and maneuverings of ships at war. Readers beware: Once begun, this book is difficult to put down.

The story is based on a simple question: What if the Great Powers had failed to halt the naval arms race in the 1920’s (as they did through international treaties signed by the U.S., Great Britain, Japan, Italy and France), “irrevocably altering military history in the following years and ultimately World War II itself?” What if “warships grew ever larger, remaining immune to the weapons of all but their own breed?” Weatherly imaginatively and impressively answers these questions, treating readers to a riveting tale culminating in a unique fleet-to-fleet clash of aircraft carriers, submarines, and “that rarest of historical actions,” a gun duel between capital ships.

The hero, Navy Captain Sheppard McCloud, struggles against the internal demons of combat PTSD incurred while defending Pearl Harbor on that fateful Dec. 7th.. Nonetheless, he tackles the most vital mission of 1942 and perhaps the entire war: intercepting the German battle cruiser and carrier force that would choke off England’s Atlantic convoy supply lines and force a British surrender.

The author’s finesse with battle scenes would be enough to recommend the book, but Weatherly also provides rare insight into the nature of PTSD and the way a captain’s leadership is tested during command of a capital ship at war.

The writing powers forward like the behemoths of the sea it portrays, taking readers on a thoroughly enjoyable, volatile journey into the fog of war and the terrifying confusion of battle. The novel is highly recommended, especially for military history buffs and military students, for whom the realistic elements of leadership and command will virtually jump out of every page.