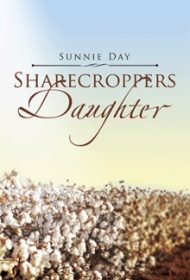 Day describes three different family homes (it’s never clear which state or states they called home), none of which had indoor plumbing. The move from wood fires to a gas stove for cooking was a big improvement in circumstances. One home had cracks in the walls that the family stuffed with rags and newspaper for insulation; Day claims she learned to read by “reading the walls at home.” The youngest child of a large family, she had the lightest duties on the family’s farm shares, but pitched in where she could.

When the narrative focus is on her early days on the farms, Day’s story is an illuminating, if scattered, look at a piece of rural American history. Unfortunately, she repeats some stories as many as four times, and dedicates a fair amount of the book to settling scores with extended family members. For example, her lengthy descriptions of her Christian faith and piety rub roughly against the story of a sister who once called Day’s husband clumsy when he tripped. The sister is currently in assisted living due to “Alzheimer’s or dementia” and having suffered falls that broke some bones. Comments Day uncharitably: “What comes around goes around [sic] Now look who’s clumsy.” She also lectures those who break the law because they’re poor, after herself describing a habit of theft from an employer whose merchandise she sold to make ends meet.

The book suffers, as well, from some grammatical and spelling errors, such as “fowl [sic] mouth” (the correctly spelled “foul mouths” is also used in the same paragraph).

Personal recollections such as those in Sharecroppers Daughter can add to our understanding of history. Unfortunately, Day’s need to have the last word in several personal disputes steals focus from what could have been a much more valuable narrative.