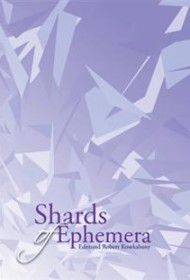 In this elaborate comedy of manners, a shapely young gold digger named Tammy A. (“for Anonymous”), who has deployed her charms from Bali to Monte Carlo to Rio, finally meets her match in a jaded geezer who has been around the block himself. Will he become her next victim or her comrade in arms? That’s the ironic question.

Stocked with a nicely drawn supporting cast of feckless playboys, fallen aristocrats and delusional fools, Edmund Robert Kowkabany’s second novel, Shards of Ephemera, is, at its best, a witty indictment of contemporary greed and vanity. The author seems well acquainted with Tom Wolfe’s ruthless strivers and the comic venom of satirists such as Martin Amis.

Still, reader beware. Kowkabany’s baroque prose can be hard to digest. Here’s Tammy the temptress deciding whether to answer a knock at the door: “It was such a diffident solicitation that it took some moments to surmount the ambient urban din and proclaim itself. … When at last her attention was summoned back to the present moment, though the tapping was no more assertive than initially nor foreboding, Tammy immediately suspected, with sybylline clairvoyance, that the impending crisis had come, was being gratuitously delivered at their door.”

Such style aims for erudition and Nabokovian invention (there’s even a character named Humbert), but it most often obscures the narrative. Introducing a buffoon named Stanton Bartholomew, Kowkabany writes: “His voice and jargon were both effete and overweening, bespeaking a certain flamboyant stereotype that inevitably lingered as caricature.” The same can be said for all of Kowkabany’s characters.

Kowkabany is an observant writer, down to the sparkling Manhattan chandeliers and pricey plates of oysters in Tammy’s world of crass opportunism, but his moral comedy gets mired in his overblown prose.