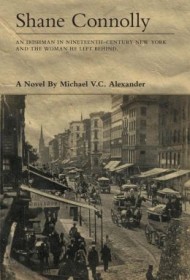 Befitting a novel penned by a former history professor, Shane Connolly is as much a book about 19th century history as it is about the trials and triumphs of its title character.

Set in 19th century New York City and Ireland, the book tells the tale of young Irish Immigrant Shane Connolly against the backdrop of history. Rampant gang activity and boxing fever, the commercial development of the north, the Civil War, the political and social problems plaguing Ireland and immigrants — Shane experiences it all as he carves out his new life in America.

Shane’s story quickly engages the reader as he leaves the love of his life in Ireland and becomes an unwilling pawn of a powerful gang leader, and the book flows nicely until the end when he returns to Ireland after 24 years to help save his son and reunite with his long-lost love.

Though the pace of the story rarely falters, the writing at times feels untrained. Words such as “because,” “several,” and “shortly” are used several times in a paragraph and details are often repeated, sometimes very soon after being first related. In a handful of notable moments, the story veers toward academia, with lengthy descriptions of political figures and social environments that add to the breadth of history, but don’t really enhance the plot. At nearly 500 pages, some solid editing could slim down the redundancies and make a more fluent story.

Even so, author Michael V.C. Alexander writes with clarity and purpose, smoothly entwining history and plot throughout the book. Despite feeling green at times, Alexander’s second novel, Shane Connolly, harmoniously blends history with its protagonist’s story of love and life, delivering a story that is interesting and engaging.