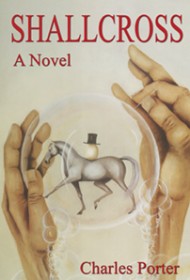 This unfailingly original debut novel enters the mind of a gin-drinking, movie-obsessed, 42-year-old Florida car dealer named Aubrey Shallcross, who shares that teeming space with a talkative phantom he calls “Triple Suiter.” Cajoler and friend, “Trip” is the sort of auditory hallucination a psychiatrist would recognize in a schizophrenic patient. But Florida/Massachusetts author Charles Porter wants readers to reconsider the definitions of madness. Isn’t the human brain a land of spirits? Doesn’t creativity itself spring from voices in our heads? Are all “psychotics” unhappy?

This is territory explored for decades by radical thinkers such as R.D. Laing and Michel Foucault, and Porter’s skepticism about conventional psychiatric wisdom reflects the burgeoning “neuro diversity” movement, which has spawned support groups such as Mind Freedom International and the Hearing Voices Network–to whose members Porter dedicates the book.

Though clearly not for everyone, Shallcross is a brave and witty piece of fiction, if also violent and not always coherent by usual standards. Witness the protagonist’s fascinating rants: “I have a confounding doo lang my friend. Distemper lately of a pernicious kind. I see myself in a gin dream stalled at a four-way intersection and I be caught in the run out of a powerful slip away.” Porter also has a vivid grasp of life in gritty Jensen Beach, Florida, and his side trips into the odd world of dressage horses and romance give his work dramatic shape. Aubrey Shallcross’s buddy The Junior, an earthy Florida cowboy, is a deftly drawn supporting character, as is Aubrey’s other hallucinatory voice, the demonic “Slip Hand,” and the book’s villain, a ruthless gunman called Carlos.

An inevitable question arises: Does Charles Porter walk the walk? In a three-page addendum to the text, the author’s friend Ken Braddick asks him, point-blank: “Do you hear another voice?” Porter’s silent response speaks volumes. And multiplies the dark attraction of this inventive first novel.