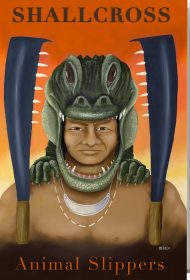 Animal Slippers, the latest in Charles Porter’s celebrated Shallcross (aka “Hearing Voices”) series, is alternately shocking and sublime, a gut punch that leaves readers grounded and gasping but with eyes fixed on a fresh perspective of the mysterious heavens above.

The story is centered, like previous works, on the author’s fictionalized alter-ego Aubrey Shallcross, a “voice-hearer” (the term he prefers to “schizophrenic”). It finds Aubrey recovering from the traumatic events of Shallcross, in which his common-law wife’s stalker held them and their family hostage in an escalating cycle of violence that left Aubrey shot in the head. But new intrigues are afoot: Aubrey discovers the supernatural truth behind recent acts of apparent environmental terrorism, and it turns out his fractured memories might hold the key to identifying an anonymous serial killer from his childhood.

Unraveling these disparate threads reveals a fantastical world just beneath the surface of Native American medicine men, ghost-haunted alligators, and psychedelic adventurers that at its core questions the conditions for the very notion of morality.

Porter posits that voices (what Aubrey calls “slippers”) represent departed souls now residing in living minds, human and otherwise. Indeed, two alligator characters are driven by the spirits of Jules Verne and the Seminole Chief Osceola as they conspire with their Seminole accomplices to achieve ecological justice. In this way, Animal Slippers offers a phantasmagorical perspective on the eco-warrior archetype, while steeping it in the gritty tradition of the Floridian crime novel.

From the story’s arresting catalyst (a man confessing the murder of his twin to a hostage he’s holding) to its sudden, altogether satisfying conclusion, Animal Slippers is the work of a brilliant novelist. There are many possible influences on display, from William Boroughs to Jim Harrison, yet Porter offers something special: a universe savage and breathtaking that never loses its sense of humor and, despite all of our delusions and doubts, still manages to make a comforting measure of sense in the end.