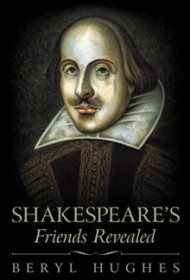 This academic essay, based on the author’s interpretations of Hamlet and certain of the sonnets, and on Shakespeare’s friendship with the martyred religious poet Robert Southwell, argues that the Bard was a closeted Roman Catholic who, but for his popularity, risked losing his head to the Elizabethan axe.

A Welsh chess champion and amateur actress, Beryl Hughes boasts scant credentials as a Shakespearean scholar. Little matter. Her book is deeply-researched and well-written — if a bit dry — and devotees of the fog that has enveloped the great playwright’s biography since Desdemona was a deb will likely welcome another claim of light.

Hughes’ close reading of Hamlet—in which the hero slays a king—convinces her that Shakespeare had an ambivalent view of monarchy (and monarchs’ Divine Rights), and she finds in the sonnets ample evidence that the oft-invoked “beautiful young man” who inspired them was none other than Southwell, a Catholic priest/poet executed in 1595 and canonized in 1970. Furthermore, Hughes concludes that the “Dark Lady of the Sonnets,” a mystery figure for more than four centuries, had to be one Anne Bellamy, who was jilted by Southwell and so devastated by it that she betrayed him to Queen Elizabeth’s dogged anti-Papist spies.

Hughes sees her mission as “brushing aside the veils of prejudice and time,” but acknowledges that her well-considered theory, in the absence of firm evidence, “possibly presents as many difficulties regarding Shakespeare’s life as it solves.”

Therein, of course, lies the intrigue, and what makes this latest dose of Shakespearean debate so frequently stimulating, even for the casual reader. But, as previously stated, this can sometimes be a bit dry, so don’t count on a major motion picture anytime soon.