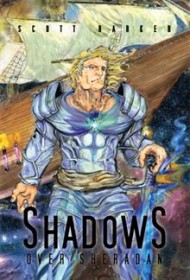 This character-driven debut novel blends together elements of adventure fantasy and science fiction.

Set largely on and around the moons circling the planet Zalaghorn, this grand-scale storyline features a cast of exceptionally developed characters and literally nonstop action. It’s essentially a good versus evil tale pitting Prince Trigarius, a “holy warrior,” against his former queen, who is now known as Izzasha, and is reviving a race known as the Necra, virtually unstoppable ethereal monstrosities from another dimension that consume victims’ souls before turning them into their own shadowy kind.

During his quest to track down Izzasha, Trigarius and his crew of the cloudship Spinnaker (which includes a giant golem, a warrior priest, and a female pathfinder) fatefully save the captain of another ship caught in a violent storm amidst the outer rings of Zalaghorn. That man, Alastair Snowmantle, happens to be a legendary adventurer and archmage. With his help – particularly dealing with the discovery of an ancient arcane tome written by a mystic from an extinct race– the group of heroes prepares to do battle with Izzasha and her ever-expanding army of spectral revenants.

The story is undeniably readable and noteworthy in many ways, but there is a bloated, “everything-but-the-kitchen sink” feel to it — a sense that the story could have been more effective if it had been streamlined. But that is a minor criticism: the main characters are fully realized and memorable, the world building and backstory are remarkable, and the storyline, while not exactly unpredictable, is briskly paced and engaging. With so many potentially fascinating locales left to explore in this sprawling universe – the surface of the uninhabited planet of Zalaghorn and the alternate dimension of Oblivion, for example – this debut novel could be the first installment of an extraordinary fantasy saga.