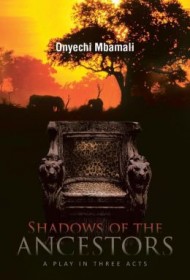 This drama in three acts, set in Umudimkpa, a fictional kingdom in pre-colonial Nigeria, is a tragedy in classic Greek style, complete with ritual, symbolism, gods, and themes of pride and power and love.

King Igwe has died, but “the journey to his ancestors…cannot commence” until Crown Prince Ifediba returns from the forest of Isibuke to the palace for the burial and coronation ceremonies. This problem is compounded by multiplying conflicts, including: high chiefs arguing for the sacrifice of 70 slaves to appease the gods; Ifediba refusing to leave the forest without his lover, a slave owned by a rival tribe who is in personal service to Ifediba’s jilted betrothed; the wives of the late king squabbling amongst themselves; youth countering elders and tradition; high chiefs opposing the Crown Prince, and he them.

Conflicts are more and ever more complex, creating a steady rise in tension as the drama moves into chaos. Yet, this work is, in the broadest sense, the remains of a love story: “Our shrunken sires were once stallions of strength; these shriveled grandmas were gazelles of elegance; and their romantic sorties were the envy of the twinkling stars above.”

With purpose and authority, playwright Onyechi Mbamali deftly and with great beauty forms this work into a gem, universal and timeless. The driving dialogue is rich with metaphor, parables, and adages, all in fresh language and lyrical intensity. The story, as revealed by varied voices, resonates with respect and disrespect, questions with no answers, willful passions, and imagery exuding aesthetic significance, as that voiced by High Chief Orimili: “When a blind man listening to a story says ‘I see’ it is because his mind has caught a picture larger than the common canvass of words.”

And so it is for the astute reader—a very large canvass that provides multiple delights and is likely to do the same for an audience when this deft play is staged.