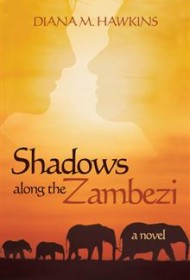 In Diana M. Hawkins’ atmospheric thriller, love blossoms between an elephant researcher and the head of the Zimbabwe Wildlife Protection League as they battle poachers and corrupt government officials.

In 2008, seven years after the brutal murders of his wife and children during one of the violent farm invasions sanctioned by President Robert Mugabe, Pieter van Rooyen focuses his energies on trying to save the wild animals in Zimbabwe’s national parks. Their beleaguered and underfunded staffs are virtually helpless to stop rampant poaching, as we see in a gut-wrenching scene where a dozen men wielding automatic rifles slaughter a family group of elephants for their ivory tusks. Jessica Brennan, a doctoral candidate studying elephants in the Zambezi Valley, joins forces with Pieter to pursue the poachers, who are working in collusion with a phony Zambian travel agency supplying a Chinese diplomat.

Hawkins grew up in Zimbabwe, and her firsthand knowledge is evident in vivid evocations of its wildlife and landscapes – and in her bitter depiction of the shambles Mugabe and his cronies have made of the country. Hawkins’ skills as a novelist are sharp as well: Jessica and Pieter’s pursuit leads to her kidnapping and a confrontation in a Zambian warehouse, both excitingly described. The capable assistance they receive from the Zambian police quietly makes the point that not all African governments are in bed with wildlife killers.

The ups and downs of Jessica and Pieter’s relationship aren’t as interesting as the interactions of the elephants that Hawkins’ lovingly delineates, but their romance makes a serviceable engine to drive the plot alongside the satisfying tale of the poachers’ comeuppance. What will linger in readers’ memories is the beautiful, sorrowful portrait of Zimbabwe, a nation whose leaders have squandered its magnificent natural resources for short-term political and financial gain.