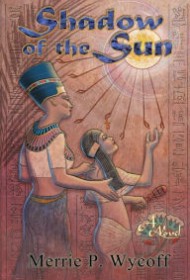 In this historical Egyptian-themed novel, a child’s-eye-view reveals the intimate lives of Pharaoh Akhenaten, promulgator of Egypt’s first monotheistic religion, and his wife, Queen Nefertiti—parents of the story’s heroine, Merit-Aten.

The book begins as Merit recounts her own birth, or “easting”: She immediately senses her uncanny abilities to communicate with animals, see auras, speak like an adult, and share in family intrigues, even murder. Merit belongs to the wing of the royal family destined to worship the sun god, Aten. Although it seems a loving creed, many cling to the old dark deity, Amun.

When Akhenaten and Nefertiti begin building temples and a mighty city dedicated to Aten, family rivals plot against them, while outside enemies see a chance to divide and conquer. Without consulting his wife, Akhenaten sends Merit to take the rigorous priestess training.  Neglected by her busy husband, Nefertiti finds solace with another man, and ultimately forces the ten-year-old Merit, immersed in the secret rituals of Aten, to swear she will abandon temple life, seek a consort and produce heirs to continue the royal line.

With new plot twists on almost every page, Shadow of the Sun is unified by Merit’s viewpoint. Some will find it hard, however, to believe a baby, then a four-, five- or ten-year-old, can comprehend the grown-up ceremonies, conspiracies, and violence, much less participate fully in them. Add the many eerie scenes delving into sorcery and the supernatural and you have a story that seems targeted to diehard fans of Egyptian history and fantasy, rather than general readers.

Those fans, however, will find much to appreciate. Wycoff is devoted to her material, taking great pains to assure that the scenery, pageantry and violence of Egypt, circa 1300 BC, is fairly and clearly depicted. Her story deals with ageless themes of love, jealousy, spirituality and death while tying itself faithfully to a colorful, alluring historical setting. For those who love this genre, Shadow of the Sun offers many satisfactions.

Note: While there’s a glossary at book’s end, a family tree also would have helped readers track the many complex names and relationships.