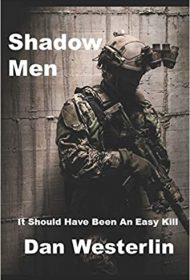 Jabbar is backed by Yemeni “senior statesman and politician” Khalid Hamza Yasir, who—soon after the rest of the SEALs escaped, and for unknown reasons—showed up in a “caravan of cars” at the Syrian hospital where the mission took place. Funded by the United Nations and NSA agent Dunston, Yasir is colluding with Dunston with plans to set off a dirty bomb in the U.S.

The story delivers tough-talking characters and straightforward prose that move things along at a clip. Unfortunately, the plot is confusing, with many unanswered questions. It’s never clear why the Syrian doctor is being targeted by the SEALs; neither is the reason behind the collusion between the Dunston and Yasir. Dunston also sets Navy official Wilson up to run Titan Industries, which appears to be a front for mercenaries to be used in black ops, but oddly, most of the mercenaries hired are SEALs.

Additionally, characters are stereotyped. For example, Westerlin writes: “Omar…had the heavy beard and thick body hair shared by many mid-Easterners…” More troubling, some dialogue seems racist: For example, when the SEALs rescue Lucas, the black member of the team who had been captured, another character jokes, “What, did you lose your organ grinder?”

Overall, Shadow Men is a confusing read filled with poorly drawn characters and unbelievable action. As such, the thriller is a disappointing read.