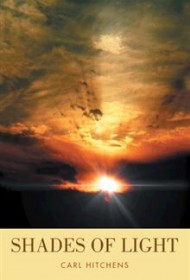 Shades of Light, a poetry collection by Carl Hitchens, uses formal language and mystical imagery to explore the oneness of the universe.

The poems are written mostly in first person and most have a pleasingly rapturous tone. Allusions to Eastern religious beliefs, Native American spirituality, and psychoanalysis abound. But while they sometimes use words that place this book in the New Age category (“higher consciousness” “superconsiousness” “transcendental”), the poems happily lack the self-absorption and sentimentality that can mar work in that genre. Most are 1-2 pages long, written as clear prose broken into lines, and would be accessible for any reader.

“The Gyre Within” exemplifies Hitchens’ theme of universal consciousness and contains intriguing kinetic and planetary imagery. It begins: “The great gyre revolves in the ocean of my sentience / its currents of consciousness going to the Four Directions— / the gulf stream of kundalini flowing north of instinct / to the isle of superconsciousness.”

Many of Hitchens’ poems are lively with a variety of images, although some mix too many metaphors and could benefit from some restraint. (Consider the love poem “Morning Glory Day,” which contains this typically breathless stanza: “I swooned in the melanin of her magic, / combusting into a comet of desire / burning off its tail of longing, / streaking across a dying winter night / into the first gasp of spring.”)

Similarly, the poems sometimes rely too much on adjectives — “exquisite playing” “higher awareness” “cosmic consciousness” “enlightened reasoning,” all within three lines; this makes the work less vital than it could be. Additionally, the book would benefit from more attention to rhythm, in terms of varying sentence and line length.

Despite such weaknesses, this book exhibits the energy of intelligence and purpose. Overall, Shades of Light distinguishes itself with its wider vocabulary, special attention to imagery and metaphor, and unity of theme. Those who are interested in “transmissions of soul” will enjoy this collection of passionate poems.