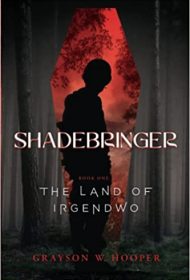 Grayson W. Hooper’s Shadebringer, Book One: The Land of Irgendwo, is a taut, exciting start to a science fiction/fantasy saga.

The story begins as a grim but compelling combat story set during the Vietnam War, where Sergeant Clyde Robbins, under attack from the Viet Cong, finds himself suddenly dead, yet mysteriously resurrected on the alien world of Irgendwo, populated by others killed in wars on Earth over the centuries.

This new world is a dangerous place, rife with baffling magic, strange creatures, reanimated corpses and warring factions. Robbins is drawn into service in the city of Junedale in its struggle against Ek Maraine, the ruler of a rival town, for control of Kir Sol, one of two waygates that are possible escapes from this hellish world.

Fighting through a plot replete with surprises, betrayals and setbacks, Robbins discovers he has been mysteriously chosen as a Shadebringer, possessed with special powers. He’s brought to the Academy of Thaumaturgy for training, where his mentor tells him “You will learn to manipulate the forces of this world with thought and subtlety.” Despite his skepticism, learn he does —and soon a crisis around control of Kir Sol leads to a climactic battle between Junedale’s forces and the evil Ek Maraine.

It’s not always easy to navigate the jumble of fantasy jargon (“The Great Ai wrote that Azurocus, eldest son of Daedrina, was banished to Kull… those who know his true voice are less apt to be fooled by the Lord of Deception”). Also, the story’s momentum is occasionally interrupted by long insertions of experiences from real wars, such as an eight-page excerpt from a WWI journal.

The novel’s strengths, however, overshadow any issues. Hooper brings wit, skilled dialogue, a telling eye for detail, and military briskness to his plot and action. Fans of such classics as Robert Heinlein’s Glory Road and Philip Jose Farmer’s Riverworld series will find Shadebringer an exhilarating and propulsive read.