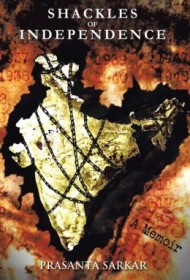 Most autobiographies of ordinary people are of limited interest to anyone outside the sphere of the writer’s own family. What lifts Prasanta Sarkar’s India-centered memoir above the countless memoirs written as keepsakes for grandchildren and great grandchildren is the author’s full engagement with the cultural and historical movements of his times.

Through Sarkar’s eyes we see the division of India after World War II and the unrest and instability that this division creates. We see how the masses of Hindu refugees from the newly created Pakistan affect him and his extended family, and we see how they must struggle during the country’s subsequent economic plunge.

In one sense, Shackles of Independence is an Horatio-Alger-like account of an individual’s struggle to rise above poverty. Sarkar works 18-hour days to attain security while pursuing advanced degrees in geology. His accounts of challenges met and obstacles overcome are, for the most part, made with such élan that the reader cheers each of his advancements.

It is a shame, in light of these many strengths, that Sarkar’s memoir is marred by numerous typos and verb agreement problems. The author also has a tendency to set his political and historical analyses apart from the main action of his story, a stylistic choice which slows the pace of the memoir and which may, consequently, lose readers. With some rewriting and editing, however, Shackles of Independence could find a place as a celebrated mainstream memoir.