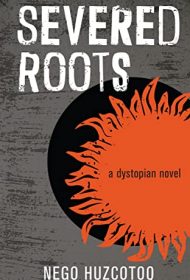 In this story, the principles of the New World Order decree that a peaceful world will arise when women eclipse the darkness of ignorance and brutality caused by the male gender, aka “mankeys.”

The story is set in Canada, although there are indications this is a worldwide movement. The concept of family, considered a patriarchal construct, has been outlawed; children are birthed by women “manufacturers” and raised by facilitators in a central location, and male adolescents receive mandatory chemical injections to eliminate their sexual urges or can opt for gender reassignment surgery.

However, not all go along easily. This is a domain of rallies, revolt, and self-immolation by women who suffer from being denied a chance at motherhood. In a clandestine location called “Island House,” women procreate with men who haven’t gotten the injections.

Protagonist Nick, a 30-something, gig magician, strives to get to “Island House,” inviting his troubled friend Beatrice along, as she craves motherhood. Nick also befriends members of the Progressives, a non-violent group that believes in “dignity for all” and opposes New World Order’s strict feminist design. In contrast, the Hardinians use brutality in their efforts to return the world to its former superior male status. As the story unfolds, Huzcotoq weaves a shadowy narrative that ultimately reveals a surprise about Nick’s own family roots.

The author builds a believable world in which men are stripped of their power and the culture is designed to make family a thing of the past. The story considers the wide-ranging consequences of this, providing a profoundly thought-provoking read. The narrative is well-paced, with ample, well-defined background and character history. Chapters are filled with apt details that illuminate the characters and happenings, and the story’s somber edge skillfully reflects the uncertainty and violence that has risen within this New World Order.

All told, this is an absorbing and provocative tale sure to satisfy fans of the genre.