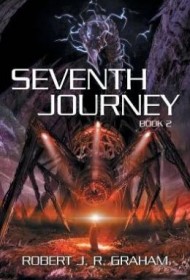 This intriguing science fiction novel combines futuristic technology with ancient spiritual teachings for a violent morality tale. The second in the Seventh Journey series, it features scientist Jacob Cross (also known as James and Lukman in different lives) shifting from one dimension of reality to another, attempting to save humanity from the evil Luzige.

Jacob Cross begins his new life as James upon awakening inside a crater on a devastated Earth, now a frozen wasteland without government. Having lost his memory, he suffers from recurring dreams of a woman named Tamara and the corporation Netex that weaponized the Auditum headset he created as a cure for insomnia. Soon James realizes his dreams within dreams are actually alternate realities he visits while asleep.

During one dream, he encounters Lucious, a monk who sends him on a dangerous mission to another realm. Each journey leads him closer to finding Tamara and to dueling Luzige. Although James died fighting Luzige in previous lives, he hopes this seventh journey will have better results.

Elements of spirituality are woven throughout the story, especially toward the end. The author, who also writes motivational and self-development books, includes frequent psychological symbolism. For example, James becomes terrified by ghoulish creatures in a dream. “The moment he let go and decided to face the demons, they disappeared.” Later, James seeks Tamara in a large, hellish cavern of fire and ash. He is warned: “This place will play tricks on you. You’ll see things from your past that aren’t really there. Don’t get caught up in the illusions.”

While ambitious and engaging, this book could be improved with more backstory on the characters, more natural-sounding dialogue, and editing for grammatical and usage errors (i.e.: “It took James a moment to digested [sic]”; “They continued to gaze at him as he walked passed [sic]”), etc.). Nonetheless, science fiction readers also interested in quantum physics and Eastern mysticism should find this book an enjoyable read.