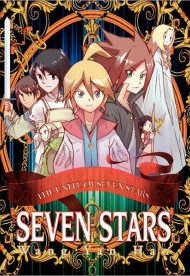 Imaginative and action-packed, this young adult fantasy, written by an author born in China, brings together seven uniquely gifted teenagers in a magical realm to battle against evil forces. Black-and-white Manga illustrations and descriptions of martial arts highlight the story.

The story focuses on Philip, a poor orphan teenager who steals to survive and makes a hobby out of tormenting the local police officer. He lives with other homeless boys in a treehouse, until one day he accidentally falls through a portal into another dimension. Prophesized as one of seven stars who will save this world, Philip discovers a previously unknown talent for dark magic.

During his adventures, he meets six other chosen teenagers, including a fierce young warrior named Yan who was trained as a monk, and Amarantha, a sweet mermaid with healing powers. Other humans and mythological creatures – some friendly and some less so – populate this well-developed magical world. Philip relies on his quick wit and newly developed ability to shoot dark energy balls from his hands to survive battles with various opponents, including the Grim Reaper.

The book – also published in a Chinese edition – targets young adult readers with humor, non-gory action, interesting illustrations, and appropriate reading level. Its use of Western names and terms make the book more accessible to an international readership.

However, there’s an obvious language barrier, and broken English hampers meaning and fluency. Missing articles and prepositions, combined with awkward sentence structure, incorrect usage, and malapropisms make the text challenging to read. For example: “there are people who have talents in mathematics, while others have a neck for literature”; “used the conjuring spell to summon a subsistence called Dark Matter”;  “the stress on his body and his mind seemed to vapour away,” among others.

Aggressive editing by a native English speaker could help this promising book find its rightful audience.  As it stands, readers must be willing to overlook the technical issues to enjoy this action-packed novel.