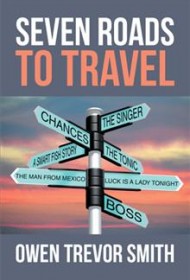 Seven stories make up this engaging collection of short and varied tales, which range from the poignant to the light, offer the occasional touch of paranormal and even have a good old-fashioned Western thrown into the mix.

The opening story, “The Singer,” finds a young man visiting his grandfather on his deathbed and hearing the elder man’s recollection of the early days of WWII and the profound impact the pure singing voice of a young boy had on the man. In “Luck Is A Lady Tonight,” a desperate gambler finds himself inexplicably lucky thanks to a mysterious woman who calls the shots. The longest story, “The Man From Mexico,” centers on a stranger’s quest for hidden treasure and a naïve ranch hand’s willingness to help him find it, while “Boss” is a simple, quiet story of a boy and his grandpa on a fishing trip that ends with a touching show of compassion.

The pieces, generally written in a straight-forward style, are well crafted with nice descriptive moments, such as, “…its tail quills swishing to and fro like a yard broom.” The plots are generally fast moving and the characters, sometimes down on their luck, other times marveling at the mystery of life, ring true to life. While at least one of the stories, “Chance,” calls for some suspension of disbelief, the author overcomes what could be a fault by turning it into a major plot twist.

Smith prefaces each story with the inspiration behind the work, giving readers insight into his process. These notes make for a more personal read and often lend another layer of understanding to the stories. While the prose has some copyediting issues, such as the misuse of quotation marks in extended dialogue, these are minor distractions.

Overall, Seven Roads To Travel provides compelling reading, offering short fiction that should particularly appeal to those who enjoy a variety of setting, tone and story type.