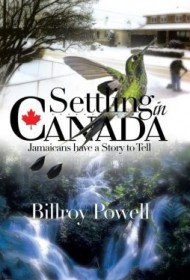 More than 232,000 people of Jamaican descent call Canada home, and many immigrated to that frigid climate from the warmth of their homeland beginning in the 1950s. Billroy Powell’s well-organized and sensitively written book shares the personal stories of why some made that choice.

Powell, a senior policy analyst and former teacher who immigrated to Canada in 1989, opens the book with a brief historical overview of Jamaica. There, natives were subjected to brutal slavery, rape and murder while under British rule for 300 years until achieving independence in 1962. Despite this newfound freedom, Jamaicans continued to live in deplorable conditions, so some looked to Canada to find new opportunities.

Powell surveyed Jamaicans from three regions of Canada. From those, he selected numerous interview subjects that represented immigration time periods from the ’50s and ’60s, the ’70s and ’80s, and the ’90s and beyond. Edited for grammar and sentence structure, the interview subjects’ tales detail the sacrifices made and accomplishments achieved, as well as discrimination faced. While some made significant inroads socially and economically, they acknowledge that some disillusioned Jamaican youth joined gangs, causing a rise in mistrust of their nationality.

Powell’s book is well-formatted and includes references. His decision to use the Jamaicans’ engaging narratives adds spark to the immigration story, and the informative and succinct chapter offering a historical perspective lends added emotional impact to their words. But while the author’s editing of the speakers’ grammar makes the text highly readable, it also robs their voices of any uniqueness. Additionally, Powell chose some personal acquaintances for interview subjects, a decision that diminishes the book’s objectivity. He also fails to include interviews with the troubled youth, which would have provided an interesting alternative perspective.

Despite such issues, the book tackles a subject that hasn’t received much attention in the publishing world. It’s a valuable resource for the history it offers regarding inroads made by Jamaican immigrants in Canada.