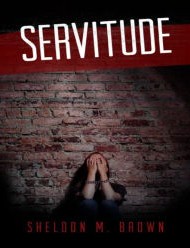 Reformed criminal Sheldon Brown has written four books in prison. His latest is an ever-expanding crime saga about a corrupt media mogul, the hardened FBI agent who wants to take him down, and the disturbing machinery of sex trafficking.

The novel opens on the Sinai Peninsula, where Egyptian gangsters are turning over kidnapped women to an Israeli trafficker for delivery to America. In Hollywood, we learn that this whole criminal enterprise props up the growing empire of billionaire media tycoon Steve Schwoeble, who is in truth a ruthlessly ambitious mob boss.

Schwoeble’s master of his domain begins to unravel when one of his henchmen guns down two police officers during a furious firefight at the mob boss’ Los Angeles mansion.  This draws the attention of FBI Special Agent Felipe Santos, portrayed here in hard-boiled fashion. “A cop was dead, and he swore that he would stop at nothing until the killer or killers were apprehended and brought to justice,” Brown writes.

Unfortunately, Brown’s noir influences are too rarely employed and the sprawling narrative tries to follow far too many subplots for its own good. That said, the novel makes good use of its exotic locales, including Miami, Los Angeles and the Grand Caymans. Fans of James Ellroy’s dense plotting will find a similarly labyrinthine series of subplots here.

But ultimately this ambitious but congested thriller can’t decide what it wants to be. At times, it’s a mob epic, and in other moments it becomes an international game of cat-and-mouse before finally descending into police procedural and courtroom drama, with one final twist to carry readers to the finale.

Crime fans who appreciate complicated, twisty plots may enjoy this story. More sensitive readers should be forewarned that the book is punctuated with graphic sex scenes and disturbing violence, particularly against women.