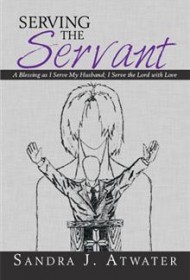 In Serving the Servant, Sandra J. Atwater, a minister’s wife, wants her readers to understand that “it is a difficult life living with a minister and trying to do your best.” That statement may better reflect the book’s content than the title.

Atwater presents as a feisty, God loving, supportive wife as she speaks of life as a minister’s wife. Rather than discuss the blessings of the position, many of her stories (her own and those of other ministers’ wives), involve malicious gossip or injustices directed at ministers’ families. Still, they aren’t without humor. Readers will chuckle at Atwater’s account of overhearing a visitor and church member rudely discussing what Brother Atwater could see in his wife. As she stepped to the water cooler, Atwater bent her head to drink and uttered, “Oh, by the way, he’s a leg man.”

The book stands on these anecdotes. Chapter 11 lists reasons ministers’ wives have difficulty making friends. Instead of offering helpful steps to remedy this, unfortunately, the chapter relates two long stories about why a minister’s wife can’t trust others. Readers will likely gain more positive insight from the chapters about women in the author’s life who mentored and befriended her, which indirectly reveal ways to support ministers’ wives.

The chapters here are untitled; titles would have given readers a better overview of the book. Additionally, clarity is hampered by the frequent overuse of pronouns without clear reference. For example, this sentence refers to three different women: “The secretary told her that she would have to make an appointment on Monday because she was not in that day.”

Readers hoping to hear of the blessings of being a minister’s wife, as the title implies, or those wanting encouragement, may need to look elsewhere. But Atwater successfully accomplishes her goal of showing the difficulties ministers’ spouses face; readers will be appropriately appalled at the author’s stories of actions and words directed toward those in ministry.