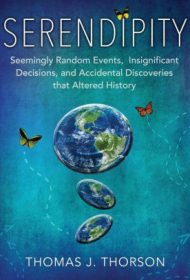 In Serendipity, Thomas J. Thorson relates a “number of turning points in world history that came about by accident, luck or a random event which tickle the imagination as we speculate how the world would be different had they not occurred.” The result is a fascinating compendium of happenstance that sparkles like a magpie’s hoard.

Commendably, Thorson’s book doesn’t overreach by trying to convince readers there’s some ontological scheme behind the happy chances that save lives and prompt discoveries. Some of the occurrences Thorson explores have gravitas, such as the accidental discovery of penicillin’s infection-conquering properties from a moldy petri dish. Others are more whimsical. Silly Putty was created when a researcher added a mislabeled ingredient while trying to produce a rubber substitute. Richard James devised the Slinky while trying to invent springs “that could keep sensitive equipment steady on ships…. Accidentally knocking some of his efforts off a high shelf, he watched in amazement as one of the springs took steps across his desk, down a stack of books and onto the floor.”

Writing in a clear, engaging manner, the author provides interesting background for these occurrences (e.g., he briefly recounts events surrounding the Berlin Wall’s construction before discussing a television announcer’s mistake that led to its eventual destruction).

Two events feel misplaced: the wrong turn that put Archduke Ferdinand in range of an assassin (leading to WWI); and Adolph Hitler’s rejection from art school which “loosed one of history’s most vicious dictators upon the world.” In a book titled Serendipity, these terrible outcomes upend reader’s expectations. Additionally, the author’s use of initials for well-known subjects (W.C. for Winston Churchill)—seemingly designed to create suspense until the subject’s name is revealed—can be off-putting.

These are minor issues, however. Thorson’s book is a provocative look at the role luck plays in our lives. The result is an irresistible collection of stories that illustrate how small moments often have an outsized impact on the world.