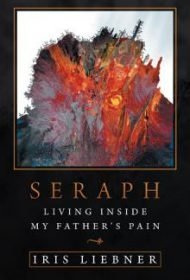 With her Seraph: Living Inside My Father’s Pain, Iris Liebner offers a book of poems, not only about her father but also about love, friendship, meditation, sex, dying and existential angst.

Liebner’s background as a student of psychotherapy lends her an acute awareness of the fears and self-accusations to which most people are prone, and her vocabulary often invokes her “personal shadows” where “low self-esteem invites treason.” Her poems referencing meditation describe the process by which she climbs “the rope of stillness…/ called breath” and reaches a still point of contemplative awareness that she shows to be elusive in her other poems.

Although her poems are loosely structured (with and without stanzas), many of the lines rhyme in an ABAB or AABB pattern. Liebner’s strongest poems describe her father’s experience in a long-term-care home: He was “treated as somebody’s dirty laundry/ Another sell-by date coming up.” And her own measured response— “He bangs the telephone receiver on the table…I don’t succumb to the melodrama”—shows her capacity for unflinching honesty.

Her humor is aptly demonstrated in her poem, “Jailbreak by Daylight,” when she steals her father from the facility: “He sat on the bench while I rushed/ to get the getaway car.”

Many of Liebner’s poems, however, are too abstract to be engaging.  Phrasing like “Why/ do we not build an army/ to fight time?” is more appropriate to an essay than the heightened language of verse. Some of the author’s poems are no more than one to five lines and read like journal entries. In others, the author fails to make the transition from personal iconography to specific meaning. In her poem, “Dream Pebbles,” for instance, the lines, “feeding the enemy/ who lives in me/ who crushes my soul” leave readers in frustration regarding the enemy’s identity.

Although the collection delivers some memorable moments, revision with an eye to the abovementioned issues would greatly enhance Seraph’s overall appeal.