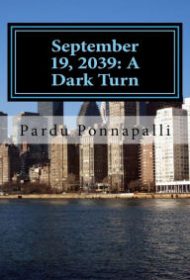 Pardu Ponnapalli’s futuristic techno-thriller takes a deep dive into a world that imagines frightening reverberations from a terrorist attack.

The book opens on September 19, 2039, the day after coordinated terrorist attacks on multiple American cities have resulted in more mass casualties than 9/11. In retaliation, President Lois Ackerman declares martial law under a temporary “Emergency Terror Act” that enables authorities to detain any Muslim citizen without warrant.

The timeline then flashes back to 1982 and a real-life massacre of Lebanese Shiites by a Christian right-wing sect. One boy, Rashidi Massad, survives, and swears revenge against the Americans he believed let the massacre happen. He grows up to become a respected scientist who must hide the fact he’s developed into an obsessed fanatic.

Back in the current year, Homeland Security Director Janice Hankins is ordered to bring in consultant Syd Egnogchi, an arrogant but brilliant profiler, while Massad is recruited by the FBI as a consultant, putting him at the heart of the search.

It’s a creepy world in the vein of Phillip K. Dick, one where all citizens are required to have embedded chips that identify them based on their DNA—a technology invented by Dr. Rashidi Massad. The book doesn’t disguise Massad’s long game as he and his cousin recruit attackers with hacked embed chips, develop biological agents, and use 3D printing to construct undetectable weapons.

Massad is somewhat of a Bond villain, albeit one with an interesting backstory and unique abilities, while Egnogchi is a prickly anti-hero whose denigration of others can be off-putting. Like many techno-thrillers, the author spends a bit too much time walking readers through technical details and explaining events rather than showing them. And Massad’s ambitious conspiracy is a bit farfetched, even in a world where terrorism makes headlines every day.

Still, readers interested in a post-modern thriller that asks difficult questions and walks right up to the edge of a potential future may be intrigued.