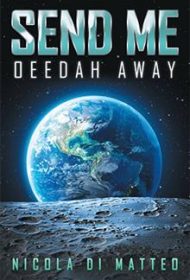 In this series, the Earthly Paradise is a shadow world of our own, descended from the Garden of Eden. Allied with Archangels and the noble souls of the Earthly Paradise called Escatons, the brothers join the spirits of ancient warriors and philosophers to defeat the Omen leader, a fallen angel called Eg’El, and to restore balance to the sacred world of the Escatons as well as to our own.

The Oeedah brothers follow their individual destinies to fight a global war across various fronts. While the first volume of Send Me: Oeedah Away recounts the adventures of Mark and Pascal, this volume focuses first on Michael’s pitched battle with Eg’El and then, when things don’t go as well as hoped, on Ignatius’s quest to save Michael.

This sequel to Send Me: Oeedah Away, is as action packed as the previous volume, but similarly impersonal. The battle sequences are described in a detached, clinical way, and as with Di Matteo’s previous novel, the story is conveyed secondhand to the narrator, who, in turn, passes it on to readers. This leads to protracted passages rendered entirely in italics.  Throughout, readers feel no intimacy with the characters nor the urgency of their actions. While the Oeedah brothers are each featured individually, they fail to emerge as distinct characters because they all have precisely the same voice and temperament throughout both volumes.

Send Me: Oeedah Away (Volume 2) scores points for originality, with a provocative alternate universe built on Christian theological principles. Unfortunately, passive descriptions and battle scenes and characters that blend together make it challenging to enjoy the world that Di Matteo has built.