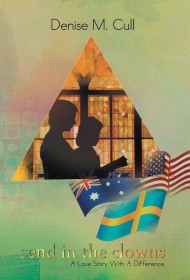 In this unusual true story, Denise M. Cull tells of the improbable romance between first cousins who lived on separate continents. One was a priest, the other a married mother of two. How this mismatched pair found their way to the altar is a winding tale told first in his voice, then hers, and wrapping up to the present day in the third person.

The history of cousins Eric and Eva begins with their parents, Swedish siblings at the turn of the 20th century: a brother who emigrated to the United States in search of work and the younger sister he left behind. He would become Eric’s father, she Eva’s mother. Though aware of one another through other family members and personal correspondence, the cousins grew up in different countries. Only in adulthood, long after Eric had completed his seminary training and Eva, a nurse, was married with two grown children, did Eva visit her American family, spending three weeks getting to know Eric. Their romance kindled and, over time, flourished, causing both to re-evaluate their lives. Their reminiscences detail the painful breaking of commitments made before they fell in love.

While an intriguing premise, the book disappoints on a few levels. Details of one leaving the priesthood and the other a 20-year marriage are repeated so often throughout the book that they begin to sound like tedious rationalizations rather than intriguing elements of the story. Additionally, the story is infused with sentimentality as the author works overly hard to convey the wholesomeness of the couple and their budding romance. That saccharin slant is underscored with snippets of song lyrics at chapter beginnings. Finally, the inclusion of several appendices showing personal correspondence and complete song lyrics feels superfluous.

Although some readers might take heart from this love-conquers-all story, others will be turned off by its sentimentality and find it lacking as a fully dimensional experience.