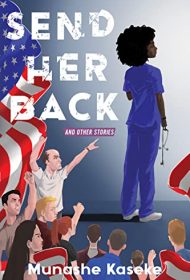 Munashe Kaseke’s stirring debut story collection probes, to sometimes painful effect, the experience of being an African woman and immigrant in the U.S.

Like the author, Kaseke’s narrators are born in Zimbabwe, and the stories all address to some degree that country and its problems, as when Makanaka (“Return to the Land of Giant Suns”) views her homeland on a visit with a mixture of “fascination and depression,” or when Nakai (“Dear Aunt Vimbai”) struggles with the way her culture objectifies women.

The prevailing theme regards the challenges that result from moving from Zimbabwe to the U.S., including the deprivations of winter and the demands of financial support from relatives at home; in a worst-case scenario, one character’s wages at the meat packing plant are squandered by her relatives striving to live “The Zimbabwean Dream.”

Kaseke also explores with relentless honesty the attitudes black women encounter in the U.S., such as the white man who regards his girlfriend as an exotic prize, and the dangers of being an immigrant, as in the title story where a woman faces deportation after being pulled over by a police officer whose mother she’s tending at her job at an assisted living facility.

Not all the stories are heart-breakingly desperate, however. For example, In “Tsoro,” the highly accomplished Chiedza plots how to outwit those who dismiss her as the “diversity” hire.

Kaseke’s prose is accomplished, deeply realistic and bristling with evocative detail, like the tastes and sights of “Globe-Trotter” where the narrator watches “the moon rise over the ocean, its glaring reflection blanketing the water.” The occasional expression in the Shona language adds vitality and texture. Although despair is a connective strand, readers root for Kaseke’s principled, determined heroines to succeed.

Send Her Back is as much an education in being a woman of color in a majority-white world as it is a rich and rewarding collection of stories that linger in the mind long beyond the last page.