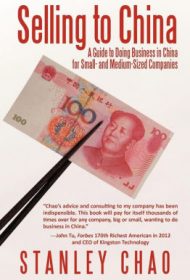 Chao begins by debunking myths about China: for example, the trope that Western businesspeople can lose deals based on mistakes handling Chinese counterparts’ business cards (such as taking notes on the back of the card). “If someone has truly lost a deal because they disrespect a Chinese businessperson’s card, then my guess is that the business proposition was in peril from the beginning,” notes Chao. Businesspeople shouldn’t get “bogged down” by the many dos and don’ts they hear. “Everybody knows you’re a foreigner, so just be yourself and stop pretending to be Chinese.”

Chao discusses myriad other issues, including: finding Chinese partners and translators; contracts and the art of negotiation in China; how to build an action plan, including analyzing the Chinese market and establishing a distribution network; and the language of China.

Finally, he presents predictions for China’s future, foreseeing thriving biotech and film industries but a dim future for aviation. China’s future may face unrest, he notes, as a new generation that shares more Western values replaces seniors who grew up under Chairman Mao.

Throughout, Chao provides helpful anecdotes and examples, many illustrating what not to do. His writing displays a personable, informal style, with humor and directness readers will appreciate. For example, he notes that it’s a “bad sign” if a company’s owner doesn’t come to your meeting. “After all, you have traveled halfway around the world…” In such situations, he quickly moves on to other deals. “We are obviously not wanted there.”

Although there are hundreds of “doing business in China” books, Chao delivers an up-to-date take on the subject. Selling to China is an accessible, readable guide for SMBs venturing into China.