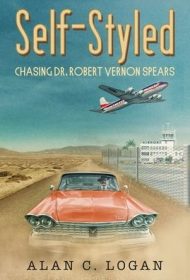 Alan C. Logan’s excellent book tells the true story of a mysterious plane crash and the prominent man implicated in the disaster.

At the heart of the book is the crash of National Airlines Flight 967, which plunged into the Gulf of Mexico on Nov. 16, 1959. Forty-two people were on board, and less than 1% of the wreckage was recovered. No cause for the crash was ever determined.

In the weeks after the crash, the mystery of Flight 967 deepened. Robert Vernon Spears, a nationally known naturopathic doctor from Dallas, had been listed among the victims. But he later turned up alive. Subsequent investigations revealed that someone had used Spears’ boarding pass, that his closest friend had vanished, and that the plane may have been brought down by a bomb. Media speculation took it from there.

But the biggest revelations concerned the well-respected Spears, who was, in truth, an inveterate con man with a 40-year criminal record—a forger, abortionist, identity thief and medical quack who had spent almost half his life in prisons and who, after quietly serving his time, repeatedly reinvented himself. His involvement in the crash was never proven, though there is evidence of some entanglement.

Relying on old news accounts, interviews, genealogy, prison and other public records, Logan has reconstructed Spears’ life (he died in 1969). It’s as amazing as anything a screenwriter could have concocted. The author has done an excellent job researching the facts and assembling a cogent, detailed narrative filled with colorful characters and all manner of twists. Logan’s style—sort of a staccato sentence structure—takes a little getting used to. And he doesn’t solve the mystery of Flight 967. But the tale he tells is in some ways more intriguing.

Sixty years on, the story of Flight 967 and Robert Spears has been largely forgotten. Logan’s effort will appeal to mid-century history and aviation enthusiasts, but more so to anyone who enjoys a good mystery.