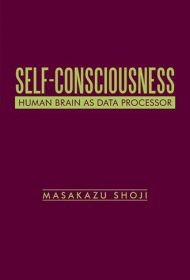 Can one explore self-consciousness, analyze the human brain, and determine that the brain functions exactly as a well-architected computer system? Mazakazu Shoji answers with a resounding “yes” in Self-Consciousness: Human Brain as Data Processor.

This weighty tome is a summary of Shoji’s previous works, in which he explored self-consciousness, utilizing his degrees in electronics and physics, his experience in the field of micro processing, and his latent interest in mythology and New World antiquity.

The author delivers a heady, high-level, scientific presentation of the facts of computer data processing, quantum physics, and probability and statistics, with detailed illustrations. He then attempts to connect the dots, matching an example of a brain functionality to a corresponding computer processing function. However, since data processing can be predicted with precision, while so many variables (ex., mood, emotions) can affect a human, the brain’s activity cannot be expected to act with nearly that level of guaranteed outcome.

The argument falls short of a robust empirical study, as Shoji uses the brain of one single test subject—himself—to reverse engineer and study. Additionally, he often digresses, speculating on humanity’s dismal state and offering his overriding theory that we are entering a new Dark Age. He bases some of this on Darwin and Lamarck’s evolutionary theories and his study of mythology, but more on personal encounters. The book is peppered with statements such as “I am firmly convinced…” and “I do not believe…”

Throughout, the author tends to make general conclusions based on limited data. His explanations of the complicated topics of manic-depressive disorder and Asperger’s syndrome, for example, are neatly summed up in one paragraph each.

Finally, Shoji haphazardly references his sources. For example, he remarks that one of his source texts is so famous that it needs no quote or reference.

As a speculative work containing a fair amount of scientific content, Self-Consciousness may provide an interesting, if dense, read to some. However, those seeking solid scientific analysis and objective study should look elsewhere.