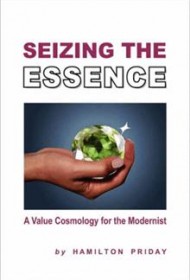 Seizing the Essence: A Value Cosmology for the Modernist criticizes dominant metaphysical views in philosophy (e.g. that the universe is a deterministic and materialistic system), defending instead a vision of reality as essence (an ultimate source of reality beyond the phenomenal world, possibly synonymous with God).

The author asserts that humans are not best defined as Aristotelian “rational animals” but rather that we are distinguished by our ability to discriminate and place value on our experiences, and it is that capability that allows us to transcend the sensory world. Throughout, he traces negative impacts of modern metaphysical assumptions, arguing instead for a value-driven cosmology that supports a more traditional ethical system and worldview. The author provides less an original philosophy than a unique synthesis of other thinkers. He combines aesthetics, psychology, ontology, and metaphysics, drawn from a wide range of traditions.

In doing so, however, he doesn’t always make the necessary connections between his brand of political conservatism and his claims about the nature of reality. And philosophers of different stripes may quibble with his characterization of them (particularly Marxists and existentialists). The jargon in Seizing the Essence may also be viewed as excessive. Take, for example, the author’s glossary definition of essence (the central concept of his book): “The ultimate, unconditional, negational Source and/or ‘whatness” of reality’…the perfect embodiment of Value which is the antithesis of metaphysical nothingness.”

The convoluted language makes it difficult to evaluate the author’s arguments, and for that reason, this is less a popular work than an offering to the serious academic. But for readers deeply engaged in metaphysical questions, it may provide a useful counterpoint to mainstream thought on the topic. It may not always be convincing, but it is sophisticated, inclusive, and ambitious.