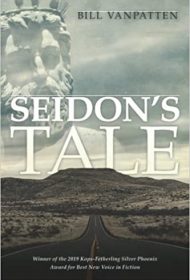 A stranger with a mythical past changes the course of a modern man’s life in this engaging narrative combining a road-trip bromance with reimagined Greek mythology.

Fleeing his lover’s angry Texas state trooper husband, Jake Hewitt hightails it out of Lubbock and nearly runs down a lost old man at the side of the road. The traveler claims to be Poseidon, Ruler of the Seas, and calls himself “Seidon.”

While Jake evades the husband’s pursuit, he listens with growing amazement to stories of his passenger’s fabled past: being swallowed by his father, Kronos, then rescued by his brother Zeus; taking refuge on Olympus to wage war against Kronos and the Titans; gaining dominion over the oceans in a lottery planned by his cunning sister Hera; and finding and losing his great love, a mortal named Pelops. Seidon’s tales are entertaining, but it’s his calm wisdom, dispensed over the course of their days together, that helps Jake come to terms with his own troubled past as an orphan raised in foster care.

The tone of the contemporary chapters, with their taut, swift prose and details like a diner’s red vinyl seats, “some cracked from years of sagging butts squeezing the air out of them,” contrasts palpably and interestingly with the more sonorous polish of Seidon’s alternating fables, as when he describes himself in a dream, riding in “a chariot drawn by large white horses snorting sea salt and pawing at the surface of a tempestuous water.”

Mythology buffs will appreciate VanPatten’s version of familiar tropes like Zeus’s lightning, Hera’s jealousy, the twisted Cyclopes, and the human creation story. Although Jake’s history and struggles are by comparison less enthralling, and the mystery remains of how exactly the sea-god Poseidon became stranded in Texas, the new life VanPatten breathes into old Greek legend carries the story along.