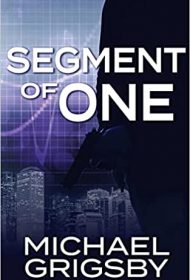 Michael Grigsby’s new thriller pits a statistician and his granddaughter against a serial killer on a mission.

David Bar David uses kabbalistic numerology to plan a series of shootings, seeking vengeance for the state’s lax gun laws that he blames for the death of his wife and unborn son. His brother, Sol, who suffers from his own twisted impulses, serves as his accomplice.

Nick Vanderoff, a specialist in statistics and marketing, offers the police his expertise in their manhunt. Nick attempts to narrow the list of suspects to a “segment of one” (i.e., the true killer) before the murderer strikes again.

Assisting Nick is his spunky 12-year-old granddaughter, Holly. In addition to helping her grandfather, Holly is trying to fit in at school – and perhaps attract the star football player – by creating an Excel model to predict rival teams’ plays. Grandfather and granddaughter find themselves in peril when David and Sol become aware of their investigation.

The novel’s premise is intriguing, and its characters shine. Holly is a delightfully realistic pre-teen. David and Sol, with their perverse obsessions, prove worthy foils for her. (Sensitive readers should be aware that Holly is sexually assaulted in a series of very uncomfortable scenes.)

Nick fluently guides readers through the novel’s theoretical underpinnings and provides some welcome comic relief. At times, however, his doings detract from the novel’s pacing. For instance, a family party at which he tries to impress his love interest brings the action to a near-standstill.

The book’s design is curious. It seems to reflect David’s obsession with number sequences by having numbers run down the left margin of each page; this idea could be more apropos by using the Fibonacci sequence or another mathematical pattern, rather than having the numbers simply run consecutively.

Nonetheless, Segment of One should appeal to readers looking for something fresh in the thriller genre.