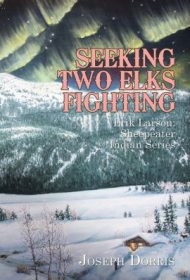 In this western adventure series, set circa 1868, a young man continues his journey to find his place in an untamed country.

Erik Larson is caught between two cultures as he traverses the large swath of Idaho and Montana territories. On the one hand, he’s bound by his heritage to a small group of Swedish settlers, including his sister, with whom he was reunited in an earlier book. He’s also indebted to the Sheepeater Indians, who raised him and with whom he shares a spiritual identity.

During his stay with them, also in an earlier book, he was given the name Two Elks Fighting, and he felt he understood the path that lay ahead. But in this book, after he marries a Native American woman and has a child, he must re-think his journey after an unspeakable act of evil leaves him focused on revenge.

Dorris has done his homework, and the excellent series displays careful attention to period detail, historical accuracy, and readability. Readers are thrust vividly into the time-period and the inhospitable territory, where Erik’s challenge is always to be one step ahead—of the weather where deep snows can trap a traveler for months; of outlaws who are willing to ambush and kill just for a horse; and of hostile Indians who see the settlers as threatening their survival.

In this book, man’s cruelty to man is never far from Erik’s mind. When he’s saved by the Chinese after a bad fall from his horse, he finds that the threat for every group of people comes not only from the suspicion of other cultures but from their own people as well.

Each book stands on its own, but the series should be required reading for young adults, who generally view the history of the developing territories as being dry as dust. The novel will also enthrall anyone who appreciates a good survival-of-the-fittest story.