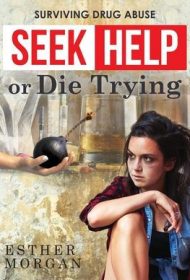 In this memoir, Esther Morgan shares her children’s struggles with addiction — from therapies and relapses to suicide attempts, financial losses, homelessness and incarceration— and how it impacted her life.

Although her three children’s substance abuse existed from their early teens, the author notes that her “Black Day” was when her daughter was expelled from high school. Next she received a phone call from Victoria’s Secret about her husband’s order for lingerie that clearly was not her size, followed by a call from a store where her youngest son had been caught shoplifting.

Life got no better after an acrimonious divorce. Her oldest son was frequently arrested and eventually incarcerated for dealing drugs. He ultimately moved to work release, rose to management at his job, married and became a father—then relapsed after 14 years. Her youngest son entered a recovery program for drug addiction at age 14. And sadly, Morgan’s daughter also suffered from addiction and homelessness—with a heartbreaking ending.

While the extended family had a long history of drug and alcohol abuse, Morgan blames herself for not coping better or realizing how stressed her kids were, particularly after the divorce. She provides occasional suggestions for readers, such as how to recognize co-dependency. But this is primarily her personal narrative, including how she coped through intense Bible study, faith in God and the support of her Christian friends.

The book is written with diary-like, stream-of-consciousness prose. It can be hard to follow the timeline, as the author shifts between past and present and often interrupts the chronology to offer various asides. While readers will likely sympathize with Morgan’s struggle, the story’s stark, unrelenting nature makes it tough-going. Even those whose own children face addiction may find it challenging to stick with the troubling tale.

Nonetheless, by revealing her own painful history, Morgan sends a message to others that they don’t suffer alone. This makes the book a worthwhile offering for those seeking such solace.